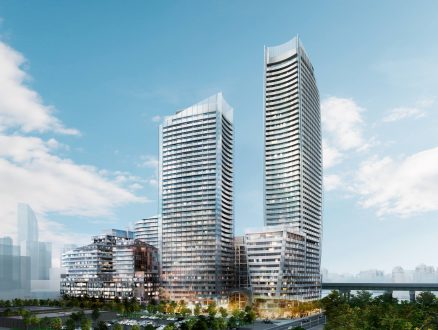 LAKESIDE is a new condo project by Greenland Group and is currently in pre-construction. The new project will be located at 215 Lake Shore Blvd. East in Toronto. Lakeside condos will be a 52 storey tower with 596 mixed condo units. The estimated completion date for Lakeside Condos is still unknown.

Lakeside Residences is a brand new multi-phase community which will be located at the old FedEx Building at 215 Lake Shore Blvd East. With breathtaking waterfront views, a premiere Toronto address, 20,000 square feet of retail space and the Greenland Group, a large scale reputable developer – Lakeside is one project not to miss. Phase 1 will consist of three towers (52, 49 and 14 stories), with the entire community being a master planned community with seven towers which include ground floor retail and and green space. Be sure to get in on the ground floor at one of Toronto’s most sought after locations.

With unparalleled access to Toronto’s extensive waterfront, the world’s best food market voted by National Geographic, and culturally vibrant neighbourhoods, you’ll always be a stone’s throw from the water’s edge and nearby nightlife, entertainment, and commercial hubs.

The two primary towers will be situated atop a podium along the eastern portion of the site and are devised to work in tandem, as one sculpted component. It draws inspiration from the two sails of a sailboat, the towers work together like the main and head sails with massing that looks to trap the wind with arched exteriors that shape gentle bows.  The western portion will feature a mixture of townhomes and low and mid-rise buildings. The project is arranged to tie into the present pedestrian realm with a pedestrian path connecting the site to the Daniels Waterfront Promenade.

Toronto’s waterfront is the largest urban redevelopment project currently underway in North America, and its revitalization is expected to take approximately 25 years and $30 billion of private and public funding to complete. This transformation will be home to over 40,000 residents, one million sq. metres of employment space and 300 hectares of parks and public spaces.

To receive more information, floorplans & pricelist fill out the form below